Information reaching us from the office of the president  has revealed the names and portfolios of some of the aides of Vice President Yemi Osinbajo, who were sacked by President Muhammadu Buhari.

The list has released by a reliable source in the Villa, includes:

But the presidency also yesterday insisted that there was no rift between the president and his embattled deputy.

Multiple presidency sources confirmed the sack of the aides of the vice president, heightening the tension in the country’s seat of power amidst insinuations that the unfolding drama was about the 2023 presidential election.

The vice president reportedly had over 80 aides who were deployed in many strategic positions, with sources around the corridors of power saying the recent attention around the vice president was aimed at reducing his influence, just as it happened to ex-Vice President Atiku Abubakar shortly after ex-President Olusegun Obasanjo won a second term.

A presidency source said letters relieving the aides of the vice president of their appointments were issued to those affected yesterday. Daily Trust gathered that the affected aides were attached to different Ministries, Departments and Agencies (MDAs).

One of the sources, who sought anonymity said: “The letters were distributed to the affected aides through the Office of the Secretary to the Government of the Federation. They were not working within the precinct of the presidential villa.”

However, two other presidential villa sources told Daily Trust last night that Vice President Osinbajo had retrieved the sack letters from the affected aides “pending the return of the president.”

One of the sources said: “The vice president has retrieved the sack letters from the affected aides. He is unhappy with the development and awaiting the return of the president from the United Kingdom.”

The second source, who also corroborated the retrieval of the letters, said the vice president wanted to know whether the 35 aides were relieved of their appointments on the order of the president.

“I have spoken to one of the affected persons who confirmed that the sack letters have been retrieved by their boss,” he said.

President Buhari, who is on a 15-day private visit to the United Kingdom, is expected back home on November 17.

It was also gathered that access tags to the presidential villa of some of the aides of the vice president were retrieved yesterday by security personnel attached to the villa.

Another report, however, suggested that the action was taken to prevent the aides from being redundant as some of the jobs being undertaken by them were no longer under the control of the vice president.

Contacted separately, the Senior Special Assistants to the President on Media and Publicity, Malam Garba Shehu and Mr Laolu Akande who normally spoke on behalf of the vice president, neither confirmed nor dismissed the reported sack of the 35 aides.

A text message sent to our correspondent by Shehu reads: “The SGF has responsibility for the issuance of letters of appointment, and where the need arises, sack letters as well. Please meet him with your questions.”

For his part, Akande said, “I just heard it just like anybody. But I’m going to find out what is happening.”

Blaid Group Forfeiture Order: Security Agents’ Disregard for the Rule of Law; A Perversion of Justice

UBA Foundation Projects Message of Hope, Encouragement as Uzoka lights up the Foundation’s Garden Ahead of the Yuletide. 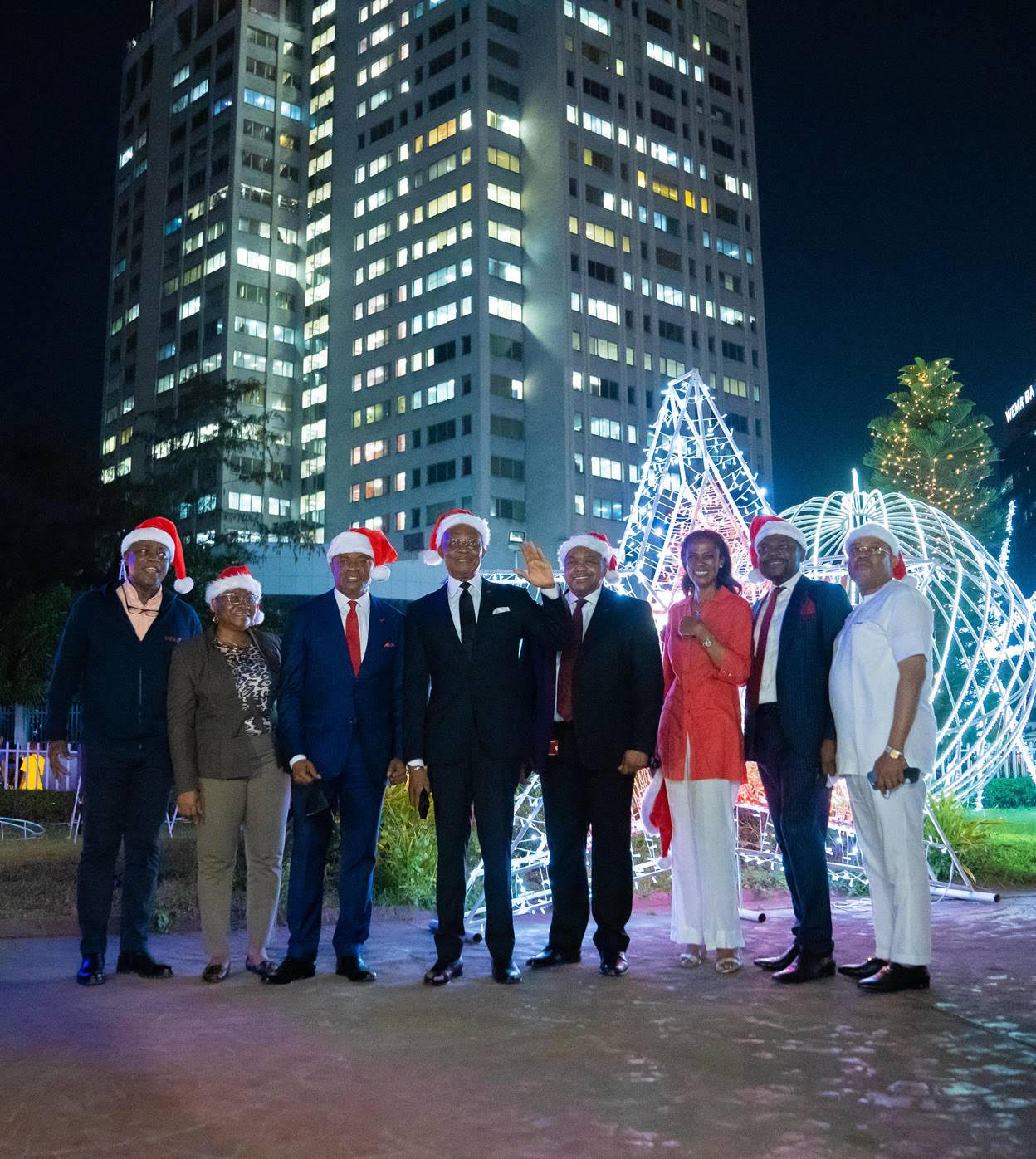 Set to Give Back at Its Annual Food Bank

Africa’s global bank, United Bank for Africa, through its UBA Foundation has been spreading joy across Africa for many years as they continue to give back to the underpriviledged in the communities in which they operate.

At the UBA Foundation gardens in Lagos where the bank is head quartered, a lights up ceremony was held to mark the start of the festive season. The garden lights were activated by UBA’s Group Managing Director/Chief Executive Officer, Mr. Kennedy Uzoka who was joined by other key management staff and some customers of the bank.

Uzoka who is also the chairman of  the UBA Foundation, emphasised that giving back was the main tenet of the UBA Foundation. He said ‘We have over the years, engaged in various activities aimed at appreciating our host communities all around Africa and especially in countries where we operate and so for us, these lights symbolise hope for the future and all the goodness it will bring into people’s lives.

‘it is hard to believe that we have been in this pandemic for almost two years. People have lost friends and family members and businesses decimated by the effects of the pandemic. There has been a general feeling of hopelessness but our desire is to fill people’s lives with hope once again.’ Continued Uzoka.

The UBA Foundation has been very active in combatting the spread of Covid -19 across Africa as the bank did not waste any time at the start of the pandemic, donating over $14m  to its communities across Africa to support the fight against the Covid-19 pandemic.

This year, the Foundation will be feeding tens of thousands of people across Africa through its annual Food bank initiative where food, hygiene products and other gifts items are handed over to those who have less, especially during the festive season.

The CEO, UBA Foundation, Mrs Bola Atta, said that the light up ceremony was important for the Foundation adding: “This goes beyond lighting up the Marina and adorning the streets with beautiful colours. It reminds us as an institution of our promise to continue to touch lives and treat our communities with kindness. We are living in very difficult times and a little gesture to put a smile on even one face, goes a very long way. We should all endeavour to do whatever we can, within our power, to uplift others’

The Lighting Ceremony which observed all necessary Covid-19 protocols was witnessed by members of staff and customers, and featured Christmas carols by UBA’s CFC choir, as well as a guided tour around the beautiful UBA Foundation Garden at the Lagos Marina.

UBA Foundation, the CSR arm of the UBA Group, is committed to the socio-economic betterment of the communities in which the bank operates, focusing on development in the areas of Education, the Environment, Economic Empowerment and other Special Projects. 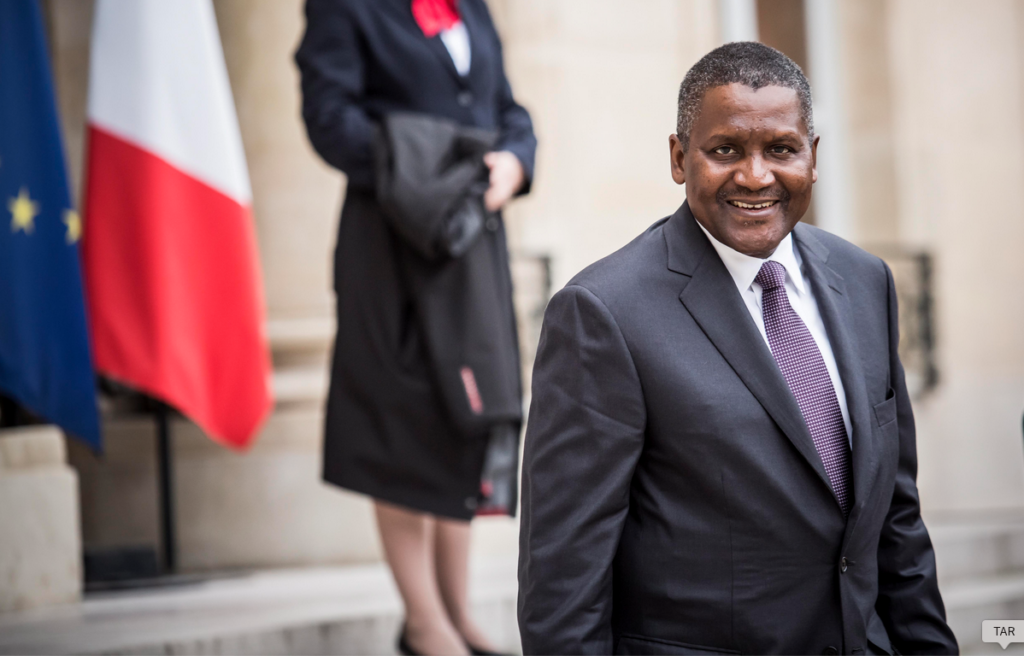 …Engineers hail the huge scale of project
The National President of Nigeria Society of Chemical Engineers (NSCh) has revealed that Dangote Oil Refining Company will be the highest employer of chemical engineers in the country when the refinery comes on stream.
The Society’s National President, Engr. Saidu A. Muhammed, disclosed this during the NSCh’s visit/tour of the Dangote Refinery and Petrochemical project at Ibeju-Lekki, Lagos at the weekend.
He commended the company for its contribution to energy security in Nigeria.
Engr. Muhammed, who led members of NSCh on a tour of the Dangote 650,000 barrels-per- day refinery project in Lagos, to mark the end of the association’s 51st anniversary celebration, said the industries in Nigeria have not been able to absorb the over 1,000 engineers  yearly from Nigerian Universities.
Muhammed stated, “We, the Nigerian Society of Chemical Engineers, have keenly been watching the progress of the refinery project.
“When completed, the refinery will be singular largest employer of chemical engineers in the country. Nigerian Universities turn out about 1,000 chemical engineers every year and the avenues for employment have been very scarce.
“The industry has not been able to fully absorb the number of chemical engineers that passed out of the universities years ago.
Some companies within the sector are not running at optimum level. Therefore, employment is really key.
“However, from the energy security point of view, chemical engineers are always concerned about what can be put in place to guarantee energy security the country. Nigeria is blessed with abundant crude oil, but unfortunately, we are importing petroleum products simply because Nigeria’s own refineries are not utilising their installed capacity”, he said.
“Therefore, when you see a brand new refinery like the Dangote Refinery that has the capacity to meet the petroleum products needs of the country, there is need to celebrate such company”, Muhammed added.
He expressed delight over the size of the project and the level of work that has gone in the construction of the refinery.
“The Dangote Refinery project is very impressive, very big. There is no project of this magnitude right now in this part of the world. We are delighted to see that the project is nearing completion and many things have been done.”
He commended the Dangote Group for its plans to ensure that Nigerian engineers are trained to handle the operation of the refinery plant, which has been acclaimed to be the largest single train refinery in the world.
“We are most impressed by the numbers of Nigerians that we see within the site working at various sections of the plant. We are glad that Dangote is building this type of project in Nigeria, which is one of the largest in the world,” he said.
Muhammed added that the members of the association are happy to see that Dangote Refinery will contribute significantly to energy security in Africa.
“We are also happy about the refinery’s contribution to energy security in Africa. The refinery is also going to have positive impact on Nigeria’s downstream oil and gas industry.”
Speaking also at the event, the Technical Consultant to the President of Dangote Group, Engr. Babajide Soyode commended the chemical engineers for coming on a tour of the refinery.
According to Soyode, Dangote’s refinery will help Nigeria meet and exceed its current demand for gasoline, diesel, jet fuel and kerosene, leaving ample product for export.
“This connotes significant positive economic impact on Nigeria and the West African region, transforming Nigeria from a net importer to exporter of refined petroleum products and curtailing significant foreign exchange outflows. “Additionally, the availability of excess fuel will also provide a catalyst for eliminating Nigeria’s expensive fuel subsidy,” he added.

Soyode said that the 650,000 barrels-per-day refinery would complement other major infrastructure investments that Dangote has planned at the strategically located Lekki Free Trade Zone in Lagos, including a port, gas processing facility, power plant, and petrochemical and Fertiliser complex. “When completed, this infrastructure complex will create a significant economy of scale for one of Africa’s largest industrial conglomerates, supporting jobs in both Nigeria and other African countries”, he added.

MARK KUCHER – The Master of Falsehoods

On October 6, 2020, NextGen Mining, a company with over 75 years of collective experience of prospecting, exploration and mining of precious metals in Nevada, entered into a Letter of Intent (JMX LOI) with JMX, LLC for the Jessie Project located in Nevada. The LOI expired on February 2, 2021. The Company has a lawsuit pending in the Second Judicial District Count of the State of Nevada and for the County of Washoe against JMX, LLC, Donn Gunn, Mark Kucher and Thomas Mancuso, former Managing Director for breach of contract and fiduciary duties relating to JMX LOI. The lawsuit is still ongoing as of August 2021.

So KUCHER became a managing partner in BONI in 2019? Is that possible? BONI was wholly owned by Bank of Nevis Limited then and there is no mention of a Mark Kucher in their financials for that year. So, did Kucher make a statement to the Toronto Stock Exchange (TSX) that he knew was not true and all because he wanted boost his corporate profile to benefit himself on the Board of DLP? The TSX should please tell us.