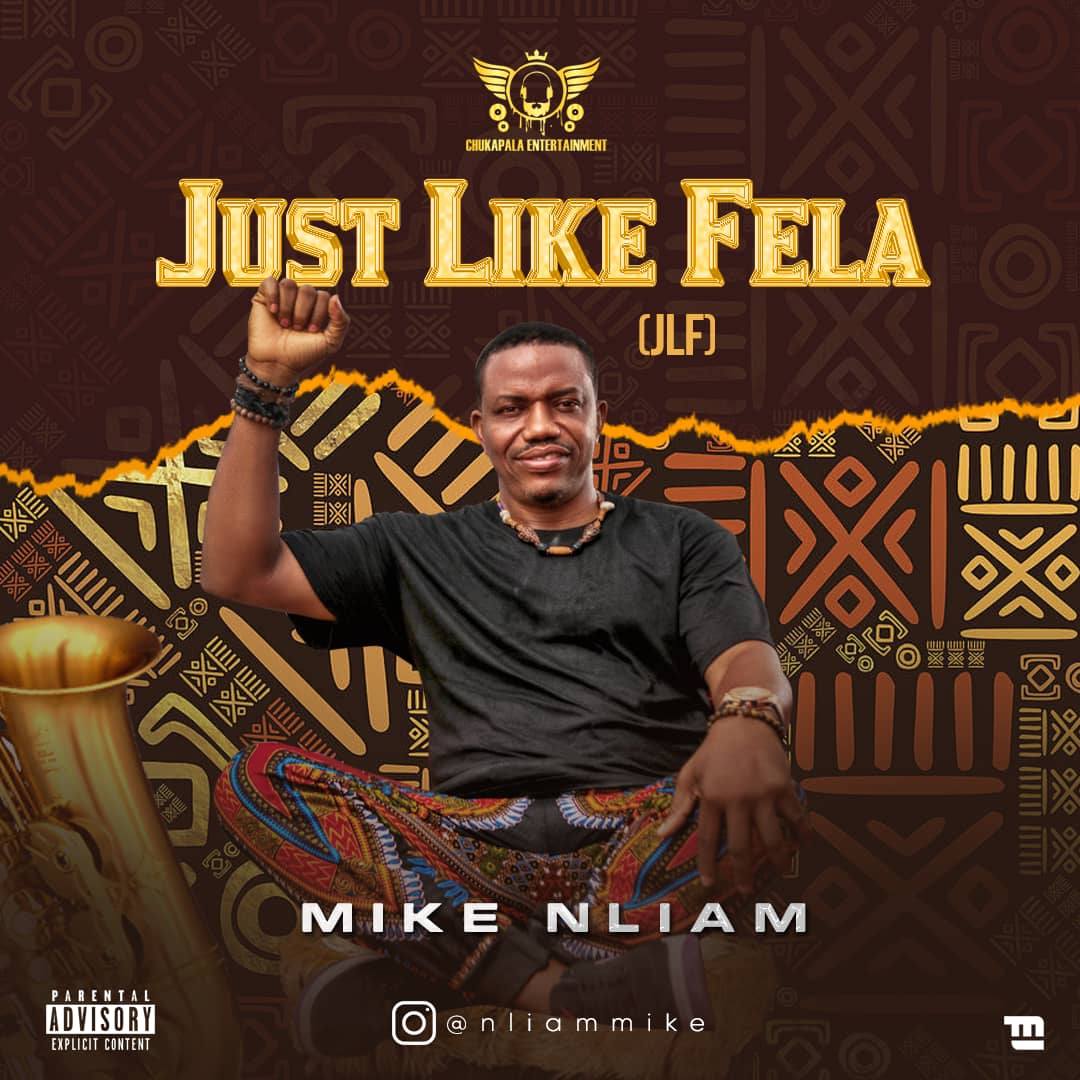 20 years after the evergreen single, ‘One Day Ego Better’, member of the defunct group, “Safari”, Mike Nliam, has returned to the music stage, with the release of his debut solo single called ‘Just Like Fela’.

This new song which is like a breath of fresh air, is a classic afro-pop with Afrobeat tunes and laced with blazing trumpet horns, heavy bass guitar strings, and drum kicks.

‘Just Like Fela’, is the first song off Mike Nliam’s new 7-track EP due out in the coming weeks. The song which is dropping with a music video, will be available for streaming on all music platforms from February 9th.

Mike who gave a five star performance in the new job gave an insight on how the song came about. Hear him, “A couple of years ago, I watched a video by ‘Maroon 5’ titled ‘Move Like Jagger’, and immediately, I was motivated to write a song in honor of the legendary Fela. I am a diehard fan of his”.

Speaking further on the track produced by Dr. Kris Okoro, Nliam said, “During writing, the catchy chorus was the first I penned before the verses”.

“In the late 90s, I came into the entertainment industry a bustling and ambitious young man who wanted to rule the music world. I met Zeb Ejiro that has an eye for discovering talents. He noticed my songwriting gift and offered a young boy an opportunity to write a song for a TV series he was producing in partnership with Ralph Nwadike and NTA titled ‘Fortunes’. That was my adventure into being a sound-track artist and romance with the movie industry began. As at today, I have done over 500 songs for movies and TV series”, Mike stated.

As “Safari” in 2001, Mike Nliam and his colleague Abay Esho, released the hit single ‘One Day Ego Better’ which made them an instant hit. They also had a sophomore track titled “Yapaa”, before “Safari” went silent.

Interestingly, the second half of the group, “Safari”, Abay Esho directed the “Just like Fela” video which is guaranteed to sweep you off your feet. 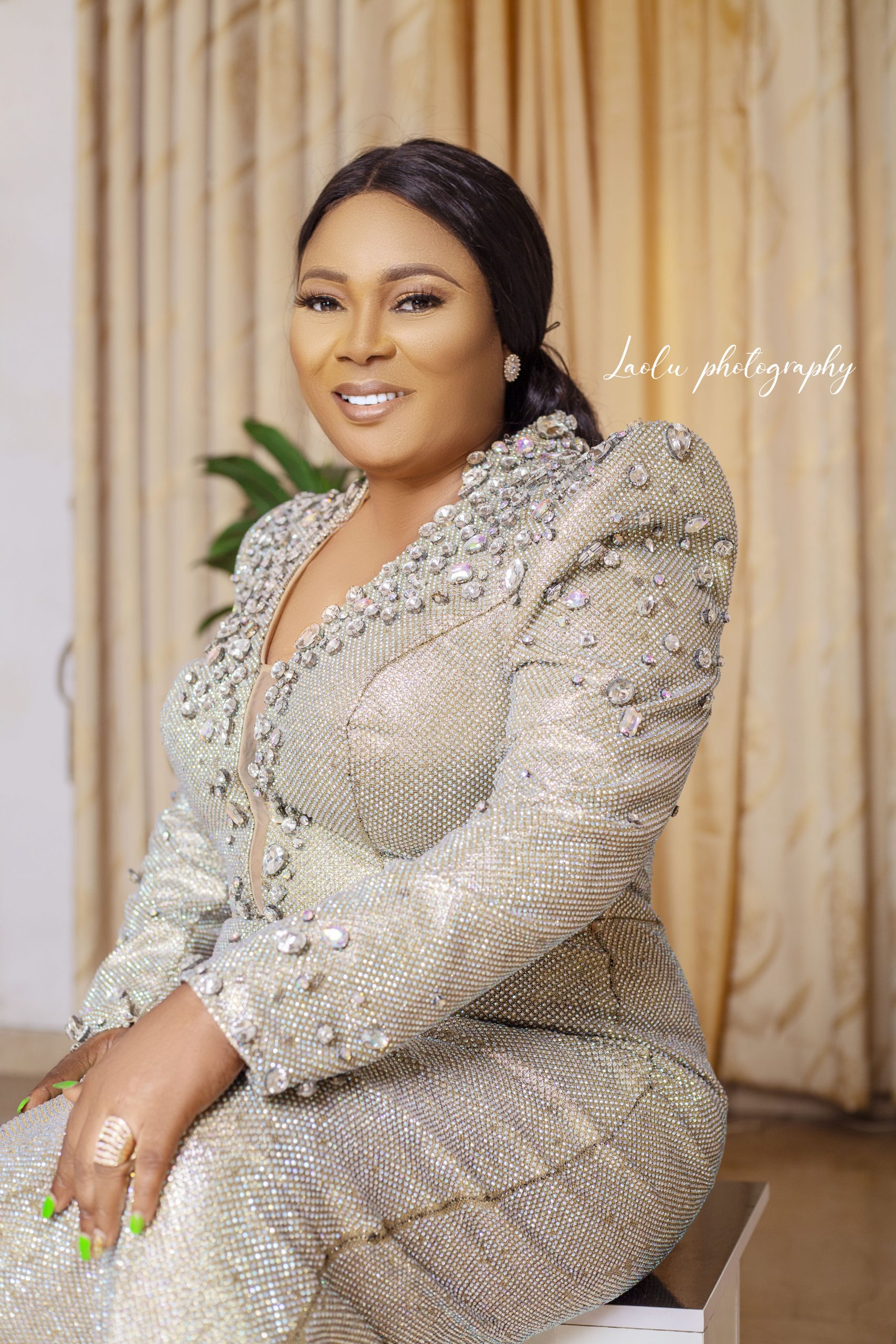 Without mincing words, Tina Umukoro has shown that she’s probably one of the finest and most hardworking actress in Nollywood in recent time.

Judging by her recent body of works, Umukoro has continued to prove detractors wrong that she’s undoubtedly a force to reckon with in the movie industry.

At the height of the pandemic in 2020, the beautiful actress refused to rest on her oars and she released 3 movies to the admiration of her fans.

The movies, Omo Honourable, Oko Asewo and Lockdown all garnered positive reviews by critics and Nollywood stakeholders since it’s release.

Shortly after appearing in several stage plays, the delectable actress left the movie industry to focus on her young family and other businesses.

Due to her love for movie-making, she resurfaced in 2007 and debuts with her self produced Yoruba movie, Alayapupo which was directed by Golugo. Her debut effort received positive reviews and its success shot her into the limelight.

A decade and a half later, the versatile actress has produced dozen of movies since her debut in the make-belief industry, making her one of the consistent filmmaker in the Yoruba movie industry.

Tina Umukoro is married to a Deltan and the union is blessed with kids. 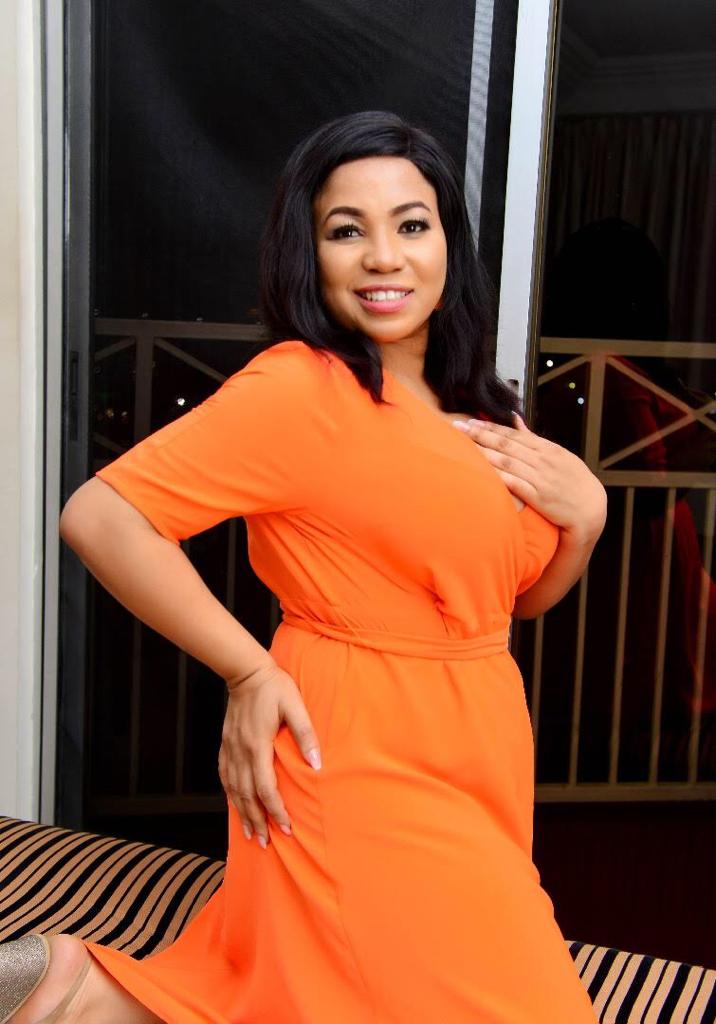 A new film produced by Tolulope Oke, is et for premiere in a bid to promote the values of the film to the target audience. The film which seeks to inspire and make people thrive beyond the odds of life will show across cinema houses in the country.

According to Tolu,” I believe in hope and I tried to project life and its possibilities. “Cookie Spot as she aptly puts it is a story of survival wherever you find yourself. There is always a means of survival.

The storyline focused on women and while challenging women to be the best wherever they are, she says: There is the need for women to support one another. The young women should see the bigger picture of whatever they are doing. Possibilities are endless in life. Whatever you are doing, you should not give up. You can always be a better person wherever you are. You should learn to survive in a way that will add value to others.Tolulope believes Cookie Spot will challenge every young lady out there to have the women and women generally should have the strong will to succeed against all the odds in life.

While speaking about the Movie industry, the actress  believes the industry is improving as it is on the world map. That according to her is very encouraging. Nigerians in diaspora can watch movies without getting the CD’s across to them. She is delighted that now, there are several platforms that male people showcase their talents. She stated that ideas rule the world and urged the industry to seek ways to develop the society.

Tolulope wants tradition and culture to be showcased more in a positive way in the movies. There are some perspectives that should be changed in the storylines. The voodoo aspects give people some wrong impression that anything can happen. In the real sense of it, selling our culture makes us unique but it should be done appropriately. Our culture should be projected positively not only about voodoo.

The industry should always seek societal uplifttment and project positive values. There are several innovative values that can impact the society.

The actress who studied Sociology form the University of Lagos as her first degree also obtained a Diploma in Dramtic Arts from the Obafemi Aolowo University, Ife.

She joined the Movie  industry in 2005/2006 but started fully 2011/2012 when she featured in Awure eni produced by Muhideen Oladapo. Ibrahim Chatta,Moji Olaiya were also part of the movie too.Ahe has featured in over 20 movies including Dazling Mirage by Tunde Kelani, Jennifer diary and Induststreet by Scene one TV owned by Funke Akindele.

Some of her personal production works are Bi ala(Like a dream) which featured Peju Ogunmola ,Akin Lewis, Dele Odule and others in 2012.I also did Alebu mi(My weakeness) in 2015.I  produced Omiran in 2016(Giant ) which featured Femi Adebayo,Rose Odita,Funso Adeolu,Dupe Jiayesinmi and others. She later produced Homesick in London in 2016.The movie focused on Nigerians living in Dispora and coming back home for them remained the best option. 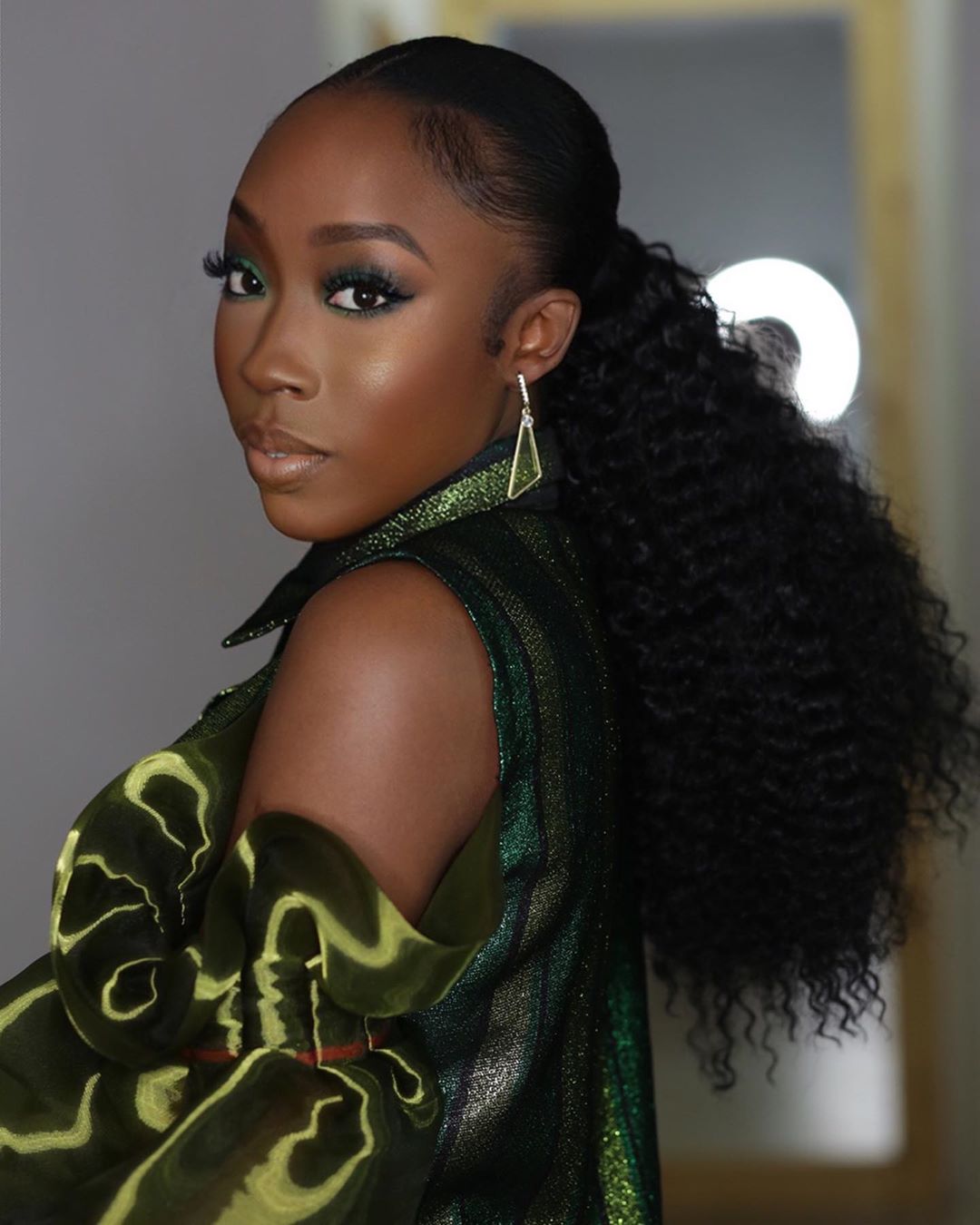 Following the release of 2 Weeks in Lagos which sparked dating rumours between the lead actors of the movie, Beverly Naya and Mawuli Gavor, Beverly has denied the story.

The rumour which was fueled after the release of 2 Weeks in Lagos movie where the two actors acted passionately as couples and also the controversial date night which took place at Circa Restaurant on the 11th of February 2021 in order to promote the movie has increased the talkability of the movie.

Speaking to a media rep, Beverly said, there is nothing going on between her and the dashing actor. ‘Mawuli is my friend and colleague, I am not dating him. We just made a beautiful movie together. Perhaps, the chemistry between us in the movie, 2 Weeks in Lagos sparked the rumour. And that promotional date to publicise the movie added to it. Please let everybody know that I am not dating Mawuli o. I should also thank people who have gone to the cinemas to see the movie, I have heard great reviews’.

“2 Weeks in Lagos”, directed by Award-winning director Kathryn Fasegha continues to wow Nigerian audiences as it continues its impressive run in Cinemas.

The movie which was released in cinemas on the 12th of February has however been the talk of the cinema audience because of the amazing cinematography and stellar cast which consists of Mawuli Gavor, Toyin Abraham, Ajoke Silva, Shaffy Bello, Beverly Naya, Efe Irele, Deyemi Okanlawon, Okey Uzoeshi, Uto Rosman, Prince Jide Kosoko, Yaw and the likes

The romantic comedy tells the story of the Love affair of Ejikeme and Lola. Their lives collide when Ejikeme, an investment banker, comes home from the United States to invest in Nigerian businesses. It is love at first sight for them but they have to contend with the political ambitions of Ejikeme’s mother who is planning a marriage between him and the only daughter of Otunba Ayodeji, a political juggernaut who is considering Ejikeme’s father as his running mate for the Nigerian Presidency

“2 Weeks in Lagos” is currently showing in cinemas nationwide