The brother of the minister of state for petroleum, Dumebi Kachikwu, was on the run last week, possibly somewhere in the Washington metro area of the United States, hunted by anti-corruption agency investigators for “multiple bribery” linked to the NNPC, and PPMC.

Stakeholders months ago raised the alarm over what it termed ‎’frightening attempt to hijack and wrap up NNPC’ by the controversial businessman who it said was taking advantage of his elder brother ( Emmanuel Kachikwu’s) position of group managing director of NNPC at that time, to control the affairs of the corporation and by large the oil industry, especially PPMC at that time.

Sources revealed that a lavish office opened in Asokoro in the wake of his brother’s appointment was used as a clearing house for shady deals.

A top oil magnate confided in this media house that marketers submit bids and proposals at the Asokoro office, obtain approvals and the documents sent to the then boss of the PPMC, Mrs Esther Nnamdi-Ogbue to implement.

Worried about the consequences and multiple fraud in the process, Ogbue at some point refused to play ball, her refusal led to her removal by Dr Ibe Kachikwu.

Ogbue was re-assigned as MD, NNPC Retail a smaller office cut off from her earlier position as part of what Kachikwu said was re-structuring of the corporation. The face-off between Kachikwu and Ogbue led to her invitation to the EFCC’s office.

Documents in our possession showed severe violations of rules in most transactions.

Pictures of the multi-billion Naira residence of Dumebi Kachikwu shows state of the art cars which includes, Bentley, Range Rover Sports and other luxury cars worth billions of Naira.

Dumebi last year was arrested by the Economic and Financial Crimes Commission (EFCC) in a case of obtaining by false pretence.He was arrested on the evening of Friday, January 9th. EFCC operatives had previously raided his No 27 Gana Street, Maitama, Abuja home in the early hours of same day and executed a search warrant of the property. 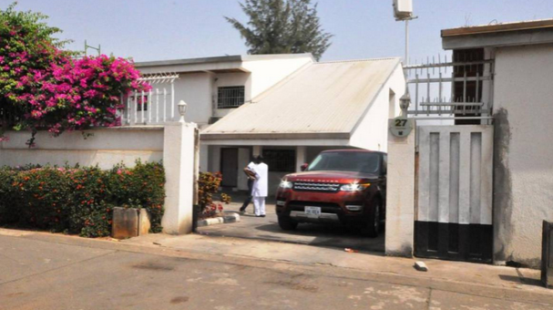 He was accused of taking N750M from Ndudi Elumelu a former House of Representatives member in a bid to help him obtain the PDP Delta state’s gubernatorial ticket. Some part of the money was paid back to Ndudi according to friends in the know.

Dumebi, a known PDP loyalist was once married to former minister of aviation, Kema Chikwe’s daughter. He is in his early 40’s with no known company, no work history, except those used to curry deals.